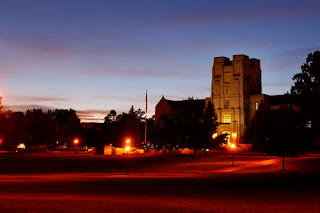 Like most of America, I’ve watched the news way too much today. The images of running policemen, SWAT team members, and a morbid line of ambulances have been laser-burned into our minds. In a year, five years, ten years, will you remember where you were today? What you were doing? Perhaps.

I can remember with clarity my exact location and activity when certain tragedies struck.

When the Challenger exploded I was sitting in a Chili’s restaurant. Watching the explosion on the restaurant’s television seemed surreal. I kept waiting for the break to commercial and an announcement that the movie would resume in 60 seconds. My mind refused to wrap around reality. The only logical explanation seemed to be that the images were Hollywood produced.

I remember watching as the first WTC tower fell. My husband had surprised me with an anniversary trip to Vancouver, British Columbia. It was the first time we had ever left our three children for an overnight trip. The harrowing ordeal to cross the border and travel over two thousand ‘driving’ miles to reach my children was nothing compared to that instant of shocked stupor when the building collapsed.

Following both events, media coverage pointed fingers, seeking someone or something to blame.

Again, today, that was the media’s plan.

Do we feel safer knowing who’s to blame? As though by finding guilty parties, there is control in our world?

As I waited in a grocery check-out line late this afternoon, I listened to the voices, the intercom, the bustle of hassled shoppers—all cadences of normalcy. For one instant, I pictured those desolate, grieving families and all they will suffer over the next days, months, and years. There is no normalcy for them—at least not for a very long time. And no amount of finger-pointing or blame-assigning will ease their grief.

As writers we should capture the emotions and images onto page, so that we shall never forget.

As religious folk (whatever religion we happen to be) we should drop to our knees and pray.

As mothers, fathers, sisters, brothers, we should weep for their losses.

Then maybe, just maybe, instead of immense, immeasurable despair, those families will feel our collective support and know that a nation grieves with them. Maybe then, they will find the tiniest bit of solace.

I want you to have a different image of Virginia Tech.
I found this snapshot on the school’s website. This hauntingly poignant image illustrated to me that even in the midst of madness, there is beauty . . . there can be peace.