Over the top and goofy excited because I’ve actually finished a workable ending to Trickle of Lies. I’ve written several endings, but none have rang true . . . or more importantly, tied up every loose thread with a bow. I’ve invested too much time and effort at this point to not be totally in love with the end.

I’ve read, and I know you have as well, far too many books where it seemed the author just threw an ending on page. Okay, so it answered all the plot questions, but it was far from satisfying. How many of us started because we read a story, fell in love with the characters, and then desperately wanted a different ending? Tell the truth! Every writer has more than one book they’ve kept on a shelf because they yearn for a different ending. For me, there are some that I want to rewrite; others that have such a perfect ending, I long for the strength to write something so worthy.

I had an epiphany on the way to work two mornings ago. I’d already decided to just write another ending — any ending to finish the silly thing. I wasn’t pleased with the decision, but I want it done. Maybe that’s what Madam Muse was waiting for: the show-up-now-declaration-or-I’ll-write-something-crappy decision to kick it into high gear. So, here’s to writing into a corner and then finding a way out.

By the way, the boy came up with a book jacket for me. A little tidbit to keep me motivated and moving to the end. Gotta love computers — and those who are computer literate — which is not me. As I’m fond of saying, I don’t need to be all that smart, just surround myself with smart people. 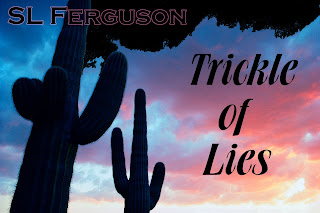 Wish me luck on the way to the end.
See you around the porch soon.
Until then,
~Sandra