It’s January 3rd and already a dozen, okay a half of dozen, things have broken or malfunctioned in my house. Isn’t there some sort of grace period after the holidays? Some part of the warm fuzzy left-over feeling that should keep everything from tanking at once? God knows, if all the chocolate I consumed during the holidays gets to stay plastered to my hips, then I am entitled to a few bonus ‘nothing-goes-wrong’ weeks.

Besides I don’t have time for ornery machinery and cantankerous equipment, I’m working on resolutions. How can I possibly resolve to keep up with the laundry in 2007 if my dryer heads off to lint heaven? Not that I really care about laundry, but the ‘whole persona of better mom and wife’ looks really good on my personal resolution list. And if I make an attempt to keep up with the house stuff, at least on the surface, doesn’t that give me more forgiveness leeway when I all but crawl in my computer to get the writing finished?

Short time-out while my dog interrupted. She, or affectionately known as 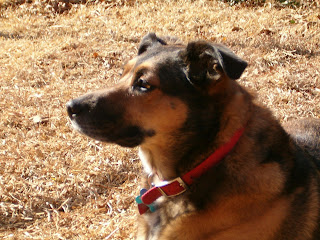 Autumn the puppy–despite the fact she’s six–was interested in licking an envelope. Where was she last night when I finally sealed the last of my Christmas/New Years’ letters? Yep, I know it’s January 3rd and that would technically make my letters late in delivery. I don’t, however, believe in rushing these things and getting my holiday missives mixed in with the clutter of everyone else’s. My letters arrive fashionably late. I’ve even considered forgoing the traditional holiday rush and moving straight to Valentine’s Day letters. Those would be read just for novelty sake.

As for New Year’s resolutions, I have a pocket full of them. Topping the list, however, is getting back to the book that has haunted me for over two years–and finally typing THE END to it. Dozens of writing projects, some moderately successful, have interfered with the completion of Trickle of Lies. Now, it’s simply time to ignore the distractions and see if these characters deserve to see the light of publishing.

0 thoughts on “Resolutions and stuff”