I am a bit of a DIY nut. Not the most talented rehab expert, but darned persistent when I need to learn a task in order to complete a make-over. 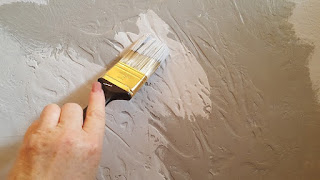 I’ve discovered that while not a master tradesman (and my hat off to those who are), I’m a fair Jack {or Jill, if you will} of many a trade.

To me writing is the birth or rebirth of an idea. I rather like taking some nugget of a scene/conversation/characteristic and allowing my imagination to run wild. In the real life of my home, I face limitations: color, texture, my expertise or the overall expense, but in my mind, there are no limits.

If I can dream up the plot line, then it only remains I find a ‘writing’ solution to bring it to conclusion.

I must give my characters the knowledge, the experience, the obstacles or challenges that will build them equal to the tasks of the plot. Whether my characters are midget or giants in stature, stick-pole skinny or pin-up curvaceous, pimple-faced young or lined with maturity, there are no limits, except . . . and this is the most important ‘except’, he/she must be the perfect hero/heroine/ally/nemesis for my book at that precise moment.

Sounds more than a touch intimidating, doesn’t it?

Each author that you could interview would provide a different way to achieve the ‘perfect’ character for a specific role. Each would be right, if that technique works for their, well, their work.

That’s the brilliance of layering.

Many have used and coined the phrase: ‘A character is like an onion. As writers, you must peel away each layer until you find the center.’
As an experienced chef, I will tell you the center of the onion isn’t all that great. It’s smelly, and if you let that onion sit too long, it’s mushy and then more smelly.

Instead of onions, I consider my character and their layers rather like a remodel project.

Wherever a character starts at the beginning of the story is NOT where he or she will end up at the end. It’s call a ‘character arc’ for a reason.

Consider the character as a DIY remodel project.

The first step must be removal; repair/replacement/alteration/new treatment cannot take place until the old is gone.

Characters are the same.

Until the old is broken, stripped away, obliterated, the new cannot began. Besides, demolition is its own reward.

1) Consider what habits the character will need to change to start their path in the story line.
In Christina Dodd’s Just The Way You Are,

main character tycoon, Zach Givens never does for himself. He commands his minions to retrieve messages, run errands, act as butler, chef, housekeeper. Until he crosses paths with main character, Hope Prescott and gets a dose of her reality, he’s content to live in the world of his making. But to prove he’s not the monster that this fiercely independent woman, struggling student, and joyful burst of sunshine believes him to be . . . Zach must give up many of his selfish and narrow-visioned habits.

2) More, consider what beliefs must be challenged then altered for real character growth.
In Susan Elizabeth Phillips’, Kiss An Angel,

broody, secretive protagonist Alex Markov refuses to believe that an age-old marriage and mating between the Markov & Devereaux holds any merit. Even married & mated to Daisy Devereaux, to the woman who brings equal measures of joy and chaos to his life, Alex continues to deny that he’ll ever become a father and allow his ancestry to live on. The destruction of this belief system shape the hero’s character arc and spans the entire book. Under Susan Elizabeth Phillips’ careful tutelage, the introduction of this inherent and embedded belief and its constant re-iteration, the hero’s well-honed prejudices are ultimately destroyed and laid at the feet of the heroine.

Now, consider what I call the ‘married’ phase.

1) What habits are so ingrained, so necessary, so ‘revealing’ that the character must retain them?
In the ‘In Death’ series by JD Robb, 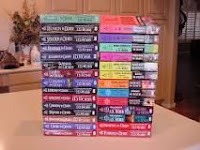 main character, Roark carries a button in his pocket. A gray button. A gray button that fell from a female cop’s suit jacket. A gray button that belongs to the cop who becomes his love, who becomes his wife. Is he a man with a button fetish? A retired criminal who steals without reason? Or does the button, which is constantly in his pant’s pocket, which never leaves his side, is the button a symbol? A touchstone? By its very presence, does it represent something so small, that which could be easily overlooked? Or does the author take this simplistic item and by its existence turn it into an integral glimpse into this character?

2) What part of the character’s belief system is at their very core and cannot and must not be changed?
Take another Roark (Howard Roark) of Ayn Rand’s The Fountainhead.

Howard Roark’s belief system is that which drives the entire book, that which all the other characters fight against, and finally embrace, or fall to devastation because it is unshakable and resolute. That is a belief system so intrinsic to the plot line, to the characters’ developments that it cannot change through the course of the story.

That which you, as the writer, must solidify on page, must marry for the duration of writing the story.

As with any good DIY project, knowing what goes and what stays is crucial. To layer a character with brilliance, the writer, a writer, any writer must first determine what parts of the characters: habits & beliefs need to be challenged, to be rattled, then to be broken. Equally important, is the determination of what parts of the character are inherent and intrinsic and must be nurtured and protect through the writing.

Writers are gods of their own creations.

What a fabulous opportunity each writer enjoys: the ability to condemn and to condone, to abandon or assure. Fabulous business is this writing world. The power of the pen is etched into the writing through an author’s conquest of layering.