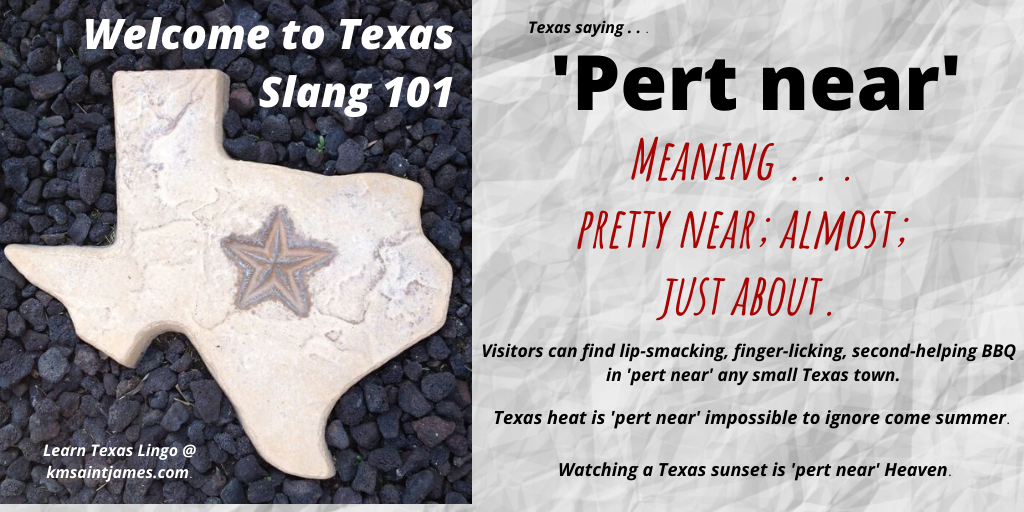 Every region of the country has its own colorful sayings.

Texas is NO exception.

Texas folks don’t mind newcomers . . . and in lots of small Texas towns, if you’ve moved in during the last 50 years or so, you might still be considered a newcomer. Learning Texas slang helps ease the transition. Remember, that the slang is based off history.

Texas Saying . . . Faster than you can shake a stick.

The ‘tighter than Dick’s hatband’ was one of my mother’s favorite expression. She referred to folks who squeezed a nickel harder than she could as tight-fisted, cheap, or just plain old mean money-spirited. I didn’t grow up on wealthy street, nor did I ever meet this mysterious Dick and his too tight hat, but if someone could ransom out allowance or bank-count the pennies on change, with more accuracy than my mother . . . I was fine not knowing them.

The Lone Star State is entrenched in pride, fiercely loyal, and firm on a unique moral compass. We’ll let you carry a gun — concealed permits required — but not wire cutters. (That’s an early Texas law leftover from cattle rustling days.) You’re welcome to perch–all day–on a diner’s stool with a cup of coffee and piece of pie as companions as long as your tip equals the cost of conversation. Feel free to chase a tumbleweed or a roadrunner, just don’t pick the bluebonnets. Enjoy a camping stay besides Texas lakes or in wide-open West Texas, but don’t complain about scorpions, rattlers, or mosquitoes. Texans know those critters live here; we’re just smart enough to not go camping with ’em.

Texas Saying . . . Letting the cat out of the bag is a whole passel easier then putting it back in.

Meaning . . . secrets, gossip, and online slurs cannot be UNSAID! Keep quiet what needs to be quiet.

My grandmother, a unique and determined woman who started life in the back of a covered wagon, was part pioneer-woman and part way-before-her-time. She lived without excuses, regrets, and few explanations. Along the way, she gathered some memorable tchotchkes. A hold-over from her days as a World War I honky-tonk dance hall gal, she had a cross-legged cow, perched on a ceramic water barrel, with the expression: ‘we sold our cow so don’t need your bull’. Not until I hit my teen years would she explain the cow and its origins. She told me simply, “Folks always have excuses. Some of ’em so smooth they’re good as fresh-churned butter. Don’t you listen to ’em. You tell those folks, Save your bull. I’ve already sold my cow. If I need an excuse or an opinion, I got my own.” Sound advice? Must have been. Served her well enough through her 98 years and mine for better than half a century.

Meaning . . . let your common sense out. Drinking with the cows leaves a bad taste in your mouth.

When you cross the state line . . . slow down. Well, not necessarily on the highways. It’s a fer (Texas slang for FAR) distance between points here in the Lone Star state. But once you reach destination, be prepared to sit a spell, enjoy some tea or a long-neck beer, and slow down your ears. Texans ‘drawled’ their words, and they’re likely to pause a moment or two before answering . . . they’ll think it through before spouting off, but be patient. The answer is worth the wait.

Texas Saying . . . That boy couldn’t hit the floor if he fell out of bed.

Meaning . . . that is one worthless individual.

Texas Saying . . . Don’t trust ’em further than you can throw.

Meaning . . . Texans take their weather seriously; never more than during twister season, which is about six months of the year. When Texans compare a person to a twisty tornado, it’s not a compliment. Twisted as a Texas tornado covers a load of sins: from an old Joe or Jane’s ‘unique’ personality to their skewed outlook on life or even the latest ‘DO’ they’re sporting atop their head.

Meaning . . . well, if you’ve ever heard cats mating, you’ll recognize this sound. Of course, cats prefer to mate in the middle of the night, right under your open window. Yep, that much noise!

Texas heat is a real-live breathing entity. One to be taken seriously!

Visitors, to Texas, should be prepared to leave The Lone Star State with good memories, remembered laughter, fine Southern cooking, and an appreciation for rattlesnakes, longhorns, and blistering sun.