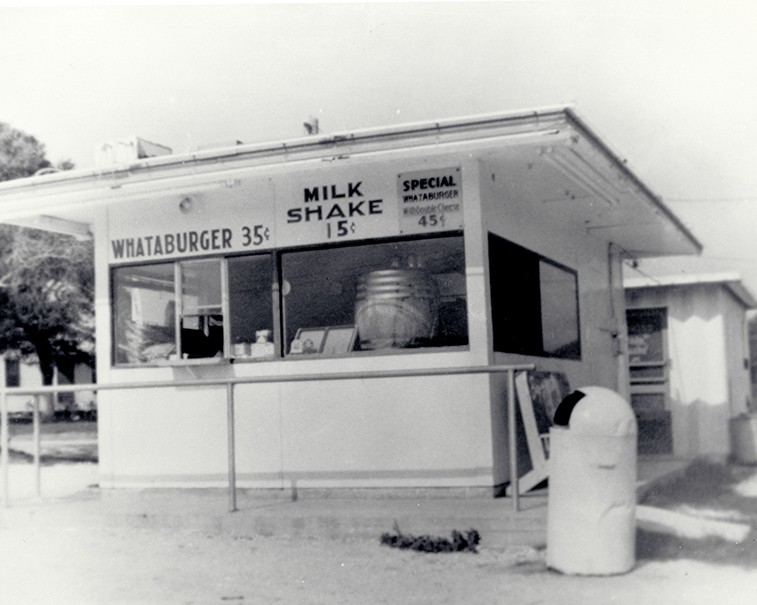 Whataburger – the Tale of a Legend

Whataburger opened its first store in Corpus Christi, Texas in August of 1950.

Hamburgers sold for .35C and milk shakes were .15C.

No inside – or for that matter outside – seating.

No Drive-THRU. (Although the drive-in burger joint was already popular.)

No phone-in orders or GrubHub deliveries.

ONE walk-up window to place an order.

What gave Whataburger the edge?

Perhaps it was their innovative thinking, entrenched with family-owned traditions:

1) The 5-inch paddy that required two hands to hold. (All others at the time served a 4-inch paddy).

2) The unique A-frame orange & white striped buildings. (Entrepreneur Harmon Dobson was a pilot and he wanted the buildings to be seen from the air.)

3) A woman at the helm – ‘Lady’ Grace Dobson took up the reins of Whataburger when her husband died in 1967 and continued until 1993 when their son took over as president & CEO.

4) Offer additional products that customers loved: Taquito (remember, this is deep in Tex-Mex country), Breakfast on a Bun, and the Whatachick’n, Honey BBQ Chicken Strip Sandwich.

5) Running brilliant promotions: the Nickel Coffee Mug, a promo designed to provide .05C coffee for Whataburger customers, as long as it was served in this mug, started in 1983 and instead of running through the year — the original marketing strategy — the promo run until 1997. Now, that’s a Whataburger deal!

7) And always, always, making the burgers fresh to order.

Folks who support a Whataburger (and that spelling is correct, and not to be confused with What-A-Burger, a completely separate organization) in their state will claim – loud & clear – their dedication to the family restaurant.

If you stop by any neighborhood Whataburger, you could see:

A few faces etched with ‘maturity’ and covered with a bit of snow on the top.
Living The Bold Life

Guests from around the world – African Children’s Choir

The original stand may be only a distant memory, but a created-replica sits @ 4126 South Staples Street in Corpus Christi if you’d like to stop by a photo opportunity.

What to eat when dining at Whataburger?

According to Ranker.com, the TOP 3 items are the Whataburger Patty Melt, French Fries, and the Honey BBQ Chicken Strip Sandwich. However, there is a load of Whataburger faithful who swear by the Breakfast Taquito.

Ever stopped off at a Whataburger?

Is it a MUST-DO to travel to Texas for a Whataburger?

Nope . . . but there are loads of other reasons for visiting the Lone Star State as well.
However, Whataburger restaurants are located in at least 10 states (Southern United States) with roughly 805 locations. Whataburger locations

On a sad note (at least, Texans consider it such) . . . Life changes and sometimes folks are just ready to retire and start a new chapter in their lives. As of June 2019, the founding family sold the Whataburger organization. Family-Owned Whataburger Isn’t Family-Owned Anymore

The blessings of a ‘place’ that has become a legend is the individual and shared memories. So many, raised in Texas, could recount some specific story from their childhood or teen years that featured Whataburger as center stage.

I can remember my dad golfing early every Saturday morning. Instead of visiting the 19th hole, dad came to the house and collected us kids then off to Whataburger we went for lunch. It was one of the original A-frame buildings with limited seating and always a line. Waiting for the burgers to be ready was expected — because DUH! made fresh-to-order takes time. Then there was the smell of bubbling French Fries and searing meat. It was enough to make any kiddo bounce in their seat and swing their legs, but it was always worth it. BEST ketchup ever! I don’t know why it’s better; it simply is. That is a sweet childhood memory — one that existed because of Whataburger.

My hubby remembers his mom taking him to Whataburger after pee-wee football practice for a large Coke. This is the South, folks, and all carbonated drinks are known as ‘Coke’ no matter what’s in the glass. And please don’t leave me a comment about kids drinking soda after physical exercise. This was a loooong time ago, before the invention of super energy drinks and healthy sports liquids. My husband’s football coaches gave the team salt-tablets during 2-a-day summer training. Believe me, lots of things were nutritionally different in the 60s & 70s. The point is that he remembers his mom waiting for him in the stands during practice then off to Whataburger where he drank his Coke and she sipped a cup of coffee and he talked a mile-a-minute recounting every play and tackle all under the orange & white striped awnings. It’s a good memory, and life should be filled with those.

Do you have any Whataburger memories to share?
Feel free to leave them in the comment section.
All will be appreciated.

One thought on “Whataburger — Tasty Travels & Tr(EATS) in Texas”