Where you watching last night? Figure skating? The first pair of Xue Shen and Hongbo Zhao? Then you missed a treat.

The You Tube video is the same routine, however, as the Olympics closely guards their videos for release, this one is of the Chinese pair during the 2009 Cup of China.

If you’ll watch through the end of the video, there is a Russian (I’m assuming — as this sounds like Russian to me) commentator who reviews the routine. Don’t worry about the words. Simply watch the slow motion of the couple.

For all of us who write, the expression of absolute trust on her face and complete confidence on his face is what we dream of existing between our protagonists. Watch the beginning — the grasp of his hand around her fragile wrist — firm, secure — keep watching and in a few moments, he grasp again, but then with the slightest brush of her fingers, he releases. When he lifts her, spinning across the ice, she balances on his two thin blades, the palm of his hand, and his strength, yet not for one instant do we, the viewers, believe he doesn’t hold her securely and safely.

I suppose this especially struck a chord with me considering it happened on Valentine’s Day . . . that most outrageous of suppositions that love needs to be celebrated on ONE DAY! Watch that video again. The love between this couple is captured in every move between them, their expressions, and the absolute certainty they place in each other. Real love isn’t celebrated on a SINGLE day, any ONE day, but EVERY day.

I’m really routing for this couple. I don’t care about their nationality, or religion, or even that Olympic Gold is the one skating dream, which has eluded their grasp. Xue Shen and Hongbo Zhao represent to me the pinnacle of a true couple . . . they are a pair, each whole on their own, but so much stronger, so much sweeter because the existence of the other.

The back porch is visible again. Snow in Texas is like good sippin’ whiskey: comes down smooth and then doesn’t linger long enough to leave an after taste. 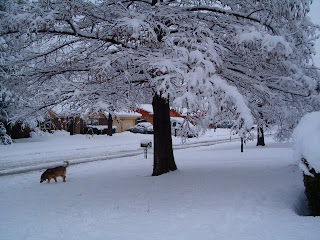 However, it was lovely while it lasted.